The Muddle in the Middle

First comes the idea (or in this case, the request). I ponder. Knit or crochet? Do I find a pattern or do I wing it? What yarn do I use? So many choices...

Then, once I've figured out a pattern and/or a plan, I acquire the yarn (if I haven't decided to use stash yarn). And then it's time to swatch. Is the yarn going to work with the plan? Then, change the plan or change the yarn?

Sometimes I need to do some math...

Once the pattern/plan is set and the yarn is chosen, it's then time to cast on. And the beginning can be interesting as I might do an interesting cast on, or I might be working an unfamiliar pattern. Do I have to stop and rip out? Do I start over? Do I have mistakes to correct? Is the plan working, or do I need to modify things?

But once the bugs are worked out, and I get settled in, it's just a matter of doing the work until the piece is as big as it needs to be. This is the boring bit, the muddle in the middle. This is where I'm at with my current on the needles/hook projects.

(I like to keep multiple projects going so they're not all in the middle at the same time, but alas...)

These are the last two Christmas presents left. Niece requested a beanie (she sent me a picture) in periwinkle. 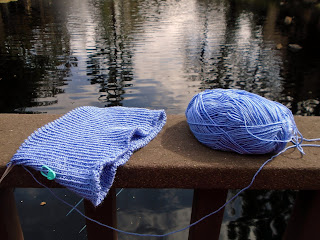 I already calculated wrong, ripped the whole thing out, and started over. And I did a different cast on, so the beginning was way interesting.

But now, it's just a very simple knit 1, purl 1, round and round and round, until I get to the point where I start decreasing to form the crown. The crown will be interesting. Now? Not so much.

I'm about halfway through the length of the hat. It's going well, which means there's not all that much to talk about.

My sister-in-law wanted a large scarf. 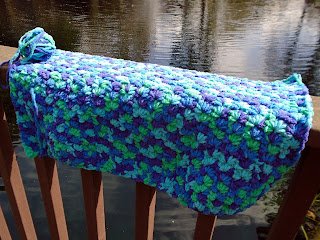 I already tried a different stitch pattern that was okay, but not as nice as this one. And I've had a few sessions where I had to sit with the written out stitch pattern and read through as I worked it. But now I've gotten the hang of it, so it's just an almost mindless project. 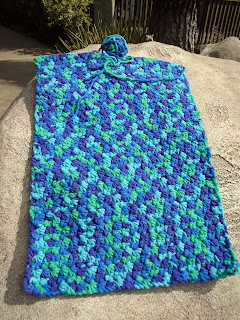 I doubt I'll write more about these projects until they're finished (or unless disaster strikes, which is not likely at this point). They're just chugging along. I'll muddle through and finish them. Eventually.

I think I need to start something new, just to have something to blog about.
Posted by Liz A. at 8:00 AM