As of Thursday, L.A. County is officially "safer at home" and the state of California is "shelter in place". And this is in effect until April something. (I won't believe an end date until they tell us it's ending tomorrow.)

I finished the periwinkle beanie in time for last week's post, and it made it to my niece on Wednesday. So, at the moment I only have one 2019 Christmas present still outstanding, and that's the huge scarf I'm making for my sister-in-law. 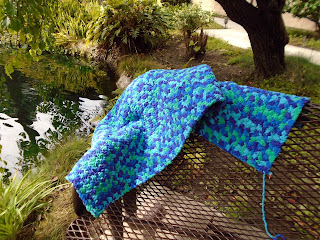 I originally bought two skeins. At the end of the first, I measured and calculated, and I figured I'd need two more skeins (four total) to make it the length that SIL wanted. I went out and bought one more skein.

Why not two? Well, the shortfall was going to be about six or seven inches, and I thought that'd be close enough.

But then I got to thinking. I could crochet a border around the whole thing. That would give it more of a finished look, and I'd have enough yarn with another skein to do that, as I'd only need just a bit of the skein to finish the full length.

This all occurred to me at about the time they closed the schools.

I ventured out on Wednesday to procure another skein of the yarn. Just in the nick of time, it turned out. Yarn stores are not "essential businesses", and they're now closed for the duration. (I knew it was going to happen eventually, so it was a priority to me to get that done sooner rather than later.)

Alas, while they had the right colorway in stock, there was a noticeable difference. 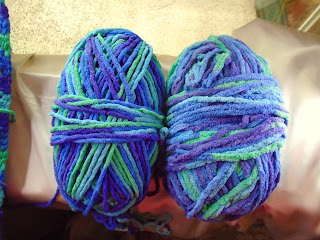 (This is why we're always urged to purchase enough of the same dye lot to complete the project.)

What to do? I have an idea. I'll show it off once it's done. Hopefully it'll look deliberate and will work. Time will tell.

Has anybody got any good projects going?
Posted by Liz A. at 8:00 AM