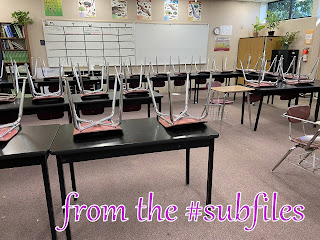 On Wednesday I was asked to cover a different class on the prep period. (This is a common occurrence.) Freshman biology. (I could not escape the freshmen last week.)

A few of the students looked familiar. They had Ms. O for geography. This sort of thing happens a lot, too.

When I'm only covering one period, everything is a bit of a scramble. I had to wait for security to unlock the door. The students and I get in the room together, so I'm scanning a lesson plan and trying to get them seated and settled at the same time.

This bit is easier with older kiddos. Middle schoolers (and freshmen are, for all intents and purposes, middle schoolers) are so hyped up with any change that this circumstance invites bedlam. And this group was difficult on top of that. I had covered the class once before, and their teacher warned me.

So, really, this next bit should not be a surprise. But then again, I did not see this particular disruption coming.

I'm scanning a lesson plan, finding the papers to pass out, looking for a roster to take toll with, and figuring out the video. (They had a video to watch with questions to complete.)

I growled at them to cut it out. They did it a couple times more. Once I had gotten class fully going and I could watch them, it stopped.

Until I glanced away.

The next scream was designed for the jump scare.

And I was done. I called security.

Oh, you should have heard them as I called. "She's calling security?!?" They were shocked. Yet, they were the ones who took it that far.

I didn't know who (if I had caught them at it, it would have been a different story), so I kicked out the four boys in the vicinity of the sound. They all claimed it wasn't them, but they wouldn't identify a culprit either.

They didn't think I was serious. For a while, they didn't move. But security was there, and he was taking them whether they wanted to go or not. Eventually, they did go.

Alas, they returned a half hour later. Sigh.

They were laughing. Apparently, they apologized profusely to the administrator they talked to. But they were obviously not sorry.