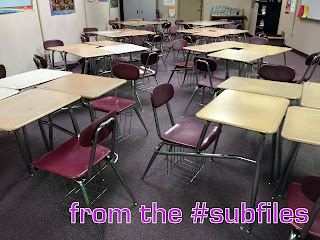 It's funny how sometimes I do get the ending to the story.

The reason that Asia came up at all? They had just had a meeting about her (and with her), and they had come up with an alternative placement for her. As of that day, she was gone.

I got a chance to verify this the following week when I again covered for the science teacher. (Here's a link to that post.) The only class I was dreading was 6th period. But, I discovered on the teacher's rosters that Asia was no longer in her class. (A withdrawn note was put next to her name.) Hooray!

6th period was finishing up the movie Super Size Me. (The health classes do a unit on nutrition, and they hit fast food pretty hard. It's a great series of lessons.) I got the class started, and then the door opened.

Asia. (Several students had lamented that "their friend" wasn't in class. I think they were baiting me. I ignored the statement.) She needed to "pick up something". She proceeded to hug half the students in class all the while talking about how she just needed one thing.

I gave her a couple minutes, but then it was time to shoo her out of class.

"Well, you don't have to say it like that!" she responded.

Deep sigh. At least now she's gone. (And hopefully her new placement will be a much better fit for her.)

It was amazing how much easier that class was to handle with her gone. Still some issues, but not nearly as pronounced.
Posted by Liz A. at 8:00 AM