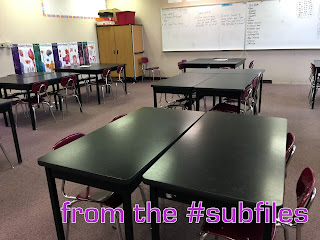 I get this sort of question about the teacher I'm covering that day more often than you might think. I usually just give a "no". Sometimes, I add in, "I don't have a sister". And that's usually that.

But this particular day, Elias wasn't going to let it go. He insisted that we looked so similar. (I've met the teacher. Perhaps there's a slight resemblance, but not much of one.) So, Elias took it upon himself to tell each student as they entered the room that I was, in fact, Ms. S's sister.

I shook my head. Silliness.

Elias told his lie. The student looked at me. I shook my head.

This didn't last, of course. I'll only spend so much time bothering with trying to disabuse them of some notion about me they get in their heads. Then, I figure if they choose to believe something that's not true about me, it's not really my problem.

By the end of the period, I had kicked Elias out of class. The reason was completely unrelated. It's too bad he isn't using his strange imagination for good.
Posted by Liz A. at 8:00 AM