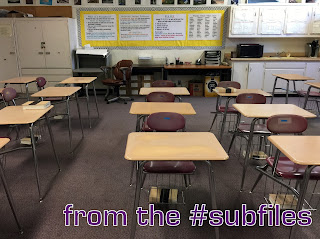 I'm back. The day last week that I would have normally written all my posts for the week was the day the cold hit me hard. And then rather than playing catch up later, I realized that it was probably for the best.

I've almost caught up on my blog visiting. And as for the cold, well, I've got a lingering cough, but I'm on the mend. Now, back to my regular stories...

It was one of the good days. The biggest problem I had was staying awake. Silent classes. On task. No issues.

And then he walked in with 6th period.

Trayvon sat over in the back far corner. When I questioned him on this, he explained that "the teacher had moved him". Most days I would believe this, but every other class had just had a seating chart update (several students asked me where they sat), and the seating chart was accurate. (And Trayvon should have been seated in front of me.)

But I let that slide. That's an easy note to leave in the interests of keeping the peace. (Some battles aren't worth fighting. Especially when it's going to suck all the oxygen from the room. Why battle one student to the detriment of the rest of the class?)

I explained to the 11th graders that they were using their books. So, they went to retrieve them. All but Trayvon. His had been "stolen".

There was one book left. The name on it said "Tray". Um, not his book? He claimed not.

I found him a temp book for the day. But before he started on the day's assignment, he needed to use the restroom.

After he left, the rest of the class informed me he might not come back.

Oh really? Oh, please, let that be the case.

Nope, they were wrong. He did return. But while he was out, I replaced the temp book with the book I was convinced was his. And he didn't seem to notice.

The rest of the class worked silently. So, Trayvon slept. (These students fade when they don't get attention.) It wasn't until the end of the period that Trayvon noticed he had the "wrong" book. When he went to return it to me. After having done nothing all period.

Deep sigh. Better get to know him now. I have a feeling I'm going to see a lot of him at the continuation high school in the near future.
Posted by Liz A. at 8:00 AM