Not Hiding the Damage 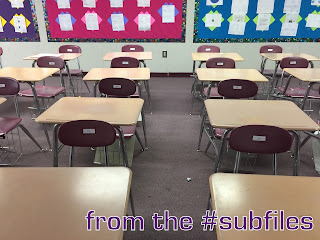 Freshman math. It was the math class that used to be called algebra 1. Now it's a combo of algebra and geometry... Anyway, the students had the class for two periods because they needed extra assistance.

I offered to help them with their assignment. It was the review for their test the next day. Did they take me up on my offer? Nope. Instead, most found "other things" to do.

Like, one boy decided that he'd rather be drawing. (They have little white boards that they use for problems that the teacher assigns in class.) Only, he got out his Sharpie instead of a dry erase marker.

(Dry erase markers wipe off. No harm done. Sharpies, on the other hand, are permanent. Even on white boards.)

I don't know what he wrote, but he found a way to obscure it when he discovered that it wasn't going to erase. Then he put the board back under his desk...

Not so fast, bucko. That's damage to school property. Somehow, he seemed to think it was no big deal.

Well, I thought it was a big deal. I retrieved the white board and I left a note explaining exactly what had happened to it.

The next day, I was in the library on an unrelated errand. The boy stopped me.

"You were my sub yesterday."

"You got me in trouble for writing on the white board..."

Oh, OK, now I know exactly who you are.