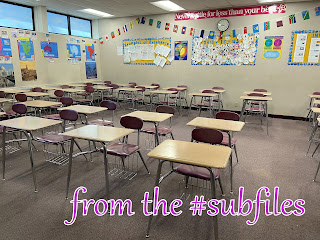 The schools were closed last week, so this story is from the geography class I covered the first week of March.

The two worst periods of the day were third and fifth. Second period was lovely. Fourth period fell somewhere in between. Most of the class was pretty good, but these were ninth graders (fourteen-year-olds). They're only nominally more mature than eighth graders. And I say eighth graders are evil for a reason.

Calvin was one of those who hadn't done much work on Monday. He did more playing around than class work. So, I was not terribly shocked and slightly grateful when he was late on Tuesday.

The school has a very clear tardy policy. There's a grace period for about ten minutes at the beginning of first period, but every other period if they are late, they are sent to tardy sweep.

There's a six minute passing period, and the classrooms are fairly close together, so there really is no reason for being late to class. If they're held up by another teacher, a hall pass allows them to enter late. And I'll always allow limping kiddos or kiddos on crutches to leave a class early or enter the class late.

So, I closed the door.

I went to begin class.

That's when Calvin reached the door. When he found that it was locked, he kicked the door and pounded on it, too.

Usually, the locked door is enough of a hint for the students to know that they are to go to tardy sweep. Some may knock. But what Calvin did wasn't a knock. What Calvin did was assault against a door. However, the pounding was loud enough to disrupt class, so I went to open the door.

Calvin attempted to go around me and get into the classroom.

A big component of classroom control is having rules and sticking to the consequences of breaking them. I have let late students into class in the past. It rarely goes well. Usually, letting the tardy sweep policy slide is a cue to the kiddos that it's play day, and I have a hard time getting them to do anything other than disrupt class.

However, when I enforce tardy sweep, I have a much calmer day.

So, I blocked Calvin's attempt at entry, telling him, "Tardy sweep".

He was not happy. Some swear words were used. At me. That's not the way to make me rethink letting him into class. I felt no guilt at making him leave.

And then I went to start class.

Fourth period was much nicer than it had been on Monday with Calvin gone.

On Wednesday, Calvin was in class a good two minutes before the bell. He wasn't much better behaved than Monday, but at least he made it to class on time.
Posted by Liz A. at 8:00 AM