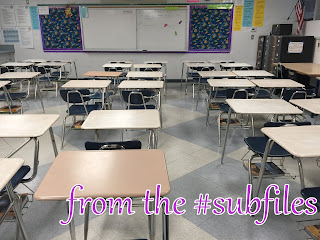 Earth science. They had a video.

Because kiddos tend to ignore videos, there's generally an assignment to go along with them. On this day it was the standard twenty facts.

The students are supposed to take down a certain number of notes, and these notes get turned in. Twenty is a reasonable number for a fifty minute video. (Ten is too few. If we attempt to tell them a number like twenty-five, the students think it's "too much" and don't bother to do any. So, there's a balance to it.)

At a point in class a bit more than halfway through, I noticed the noise level creeping up. I shushed and moved about in an attempt to settle them back down. It took me way too long to look down at their papers and notice that they all had ten-ish facts listed.

And that's when they lost it.

(Had I misspoken? I saw twenty facts in the lesson plan. That seemed like a reasonable number to me. So, I thought twenty. But I can't say for certain that I did, in fact, say twenty. I did admit this in my note to the teacher.)

I informed them that the lesson plan said twenty facts, so they needed to take down twenty facts. They still had about ten minutes left of the video. And I left it at that.

The push back died down, but they weren't going to let that go totally. A couple students started asking around. "Did you do more than ten?" And then, "Don't do more than ten." Yup, I had a mutiny. Which I ignored.

The next day I was on campus again, and I ran into their teacher. She was unsurprised at the kiddos' reaction. Apparently, they're belligerent with her, too.

She told me that a few of them had attempted to get more facts, and they really had had enough time to make up the difference, but she was going to give them ten minutes to take down more facts from their textbooks to get to twenty.

So, if I did screw up (and I'm not convinced that they didn't just hear ten because that's the number they wanted), they wouldn't lose points, because she was going to require all twenty facts for 100%.
Posted by Liz A. at 8:00 AM