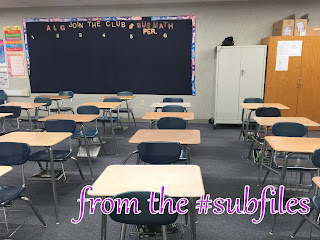 Well, they're not my class, so I rolled with it. They were happy to have an easy day. Easy points.

By fourth period I was no longer too worried about their "work". I should have known better.

Mostly, the kiddos finished the word search quickly, and then they found something else to do.

But, not very long into period four, I noted a group of four boys clearly competing on a video game on their phones.

(There are days I let this sort of thing slide. If they had had a longer assignment or something a bit more academic, the period would have felt less like a free day, and I would have been all over the boys to get to work.)

Still, I knew what was going to happen, and I decided to let it.

At the end of the period, I called for the word searches. A majority of the class had already given them to me, but I like to make a final call to make sure all of them get a chance to turn it in.

"Can I do it for homework?"

When I passed it out, I said "due at the end of the period". I was crystal clear. Besides, why would something that is clearly busy work need to be finished at home? (Sometimes teachers leave work that is just filler to keep them busy. That is so much better than leaving them up to their own devices, so I am grateful for those assignments even if I know the kiddos don't invest much energy into them.)

I was a bit too happy that they turned in word searches with two or three words found. If they chose to waste time...

(If only they had done what everyone else did that day and finish the word search first, then got out their game, they would have been fine. It's a lesson I hope they learned.)
Posted by Liz A. at 8:00 AM