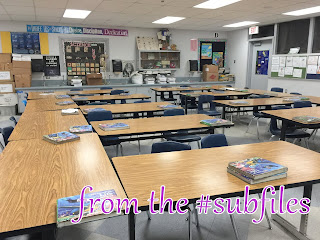 Seventh grade science. They were constructing an argumentative essay (using sentence frames) debating what caused the "canals" on Mars.

Justin walked into second period in play mode. He took way too long to get seated, and then he immediately got up because he "needed" something. And then...

In less than five minutes of class, I was done. Luckily, their teacher had left a list of nearby classrooms to send difficult children to. So, it was time to boot Justin.

Of course he resisted. But eventually he went where I sent him--Ms. D's class.

Before third period, I had a chance to talk to Ms. D. And it sounds like the punishment fit the crime.

Clearly, Justin had been playing to the crowd before. His antics were meant to elicit laughter. In the other classroom, Ms. D sat him near a group of cheerleaders. And they shut him down pretty quickly.

A year or two difference in age does make a huge difference.

Justin tried to entertain the girls. They gave him a look of pure disdain. So, Justin spent the period quietly working on his essay.

As this is all I wanted of him, I was pretty happy with that outcome.

A very different Justin returned to class at the end of the period. (I wanted him to return so he could turn in his work.) Let's hope that next time Justin has a sub in class, he doesn't immediately think it's play time.
Posted by Liz A. at 8:00 AM