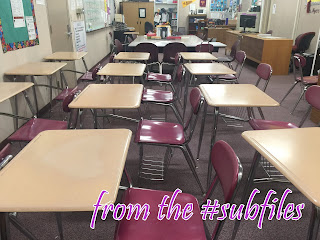 The Learning Center is a room specifically for RSP special ed. kiddos. It's the room where they get extra time to take tests, and they can go there to get extra help on various assignments.

Every period there is one teacher on duty. The room has an instructional assistant as well, Mr. Claus. (Not his real name, of course. But, he could totally play Santa Claus. All he would need would be the red suit.)

On this day I was covering fifth period. We had had about six students sign in. They appeared to be taking tests.

The phone rang. I hobbled over and answered. It was from a history teacher. She had sent three students over to complete a test. She explained that her students had been warned not to have phones out, and she wanted to know if any of her students did.

So, I hobbled over and peered over their shoulders. Two girls had their phones out. I went back to the phone and let Ms. S know.  One of the students was hers, and she told me to send her back to class.

Time passed. A student here, a student there, they finished up and returned to class. One student asked to use the restroom. And then, it was just Mr. Claus and me.

The phone rang again. It was again Ms. S. she wanted Joshua sent back to her class. I told her we had no students in the room.

Ms. S said he must be on his way back. She'd wait a bit, and then contact security. I thought it had been a while since the last student had left the room, so he should have totally returned by then.

At some point during the phone call or shortly thereafter, a new student arrived. It was kind of late in the period to start a test, but he was willing to risk it.

I had barely hung up with Ms. S when the student who had used the restroom returned. I had forgotten about him.

"Ms. S just called. She'd like you back in class."

He packed up and left. I let him know to tell her that he had been in the restroom when she called. I didn't want him in trouble just because I had forgotten a student had gone. (He had been gone a while, but it wasn't like he had vanished which is what we had thought.)

Just as he left, Ms. S called back. I told her Joshua was on his way back. Now she wanted Michael returned.

I looked to the other boy in the room.

"I was surprised he said he was Joshua," the boy continued.

Mr. Claus and I exchanged glances. He knew the boy as well and wasn't sure why he answered to Joshua either.

On the bright side, Michael was accounted for, Joshua was actually missing, and I sent the correct boy back to his class.