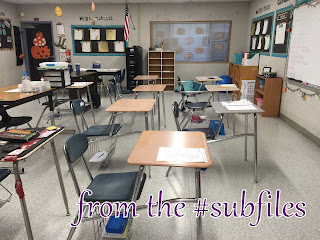 I was back in one of those very special ed. classes. These are the classes where the high school aged kiddos are doing first grade work.

First period. They did "calendar" where they colored in a calendar on that day's (and the weekend's as it was a Friday) date. Then they were to work on their News-2-You packets. (It's a very cool current events kind of assignment. Click on the link to learn a bit about it.)

The students I was working with were doing pretty well on their own. They didn't need me prompting them to do the work. And they didn't need a lot of help.

But when Adam had to write sentences, he did need help. He brought me a white board, dry erase marker, and eraser. Then he pulled out the sheet. The instructions said: Use one, two, or all of the following picture/word cards to write a sentence or story.

The words were: brown bears, fattest, vote, contest, and people.

Okay, so context... The week's story was on Fat Bear Week held in Alaska's Katmai National Park. (They declared a winner on Wednesday.) Did you know there's a live Brown Bear Cam? (They had the video feed on for three periods.) Anyway, the story was about how annually they have this contest to determine the fattest bear before they go into hibernation.

The activities for the kiddos were related to that, hence the word choices for the "story". I did not know any of this as Adam constructed his story, but his work page was pretty clear.

At times like these, I ask leading questions to get a sentence. Adam started with "brown bears". Okay. I asked, "Brown bears do what?"

His sentence was grammatically correct...