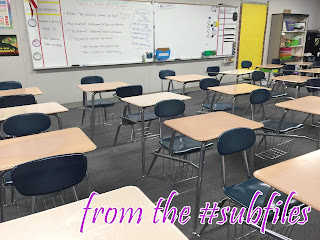 After my fall that Monday, I wisely took Tuesday off. I had been scheduled for the same classes for Tuesday and Wednesday. While I was still limping about on Wednesday, my ankle was much, much better than it had been the day prior. I would have been in miseries if I had attempted the assignment on Tuesday.

The big problem was that the teacher traveled throughout the day. She co-taught for three periods, and she had her own classes for two.

I did not know this at the start of the day. I assumed she co-taught all day, so when I was not assigned keys, I did not worry.

When I arrived at the classroom for third period, the class waiting outside informed me that they had one teacher. Well, that wasn't a major problem. I got out my cell phone, called the office, and asked that they send someone to open the classroom.

For fourth and fifth periods, I went elsewhere. It was for sixth period that I returned to this classroom.

But right before sixth period is lunch. And security is busy supervising, so they couldn't come immediately to let me in the door. I kind of wanted to get in early so I could sit and wait for the end of lunch.

I got to the classroom, hoping the other teacher who uses the classroom second period (and who was also off at that moment) would be there. Alas, no.

I stood and pondered. The office was all the way at the front of campus while this classroom was near the back. There was no security in sight.

While I considered my options, one of the assistant principals appeared. I was shocked as this was not his usual part of campus. He let a student into a classroom nearby. It appeared that she had forgotten something inside, and the teacher wasn't there to let her in.

All the administrators carry keys that let them in any room. So, as he finished up with the student and her friends (I didn't catch much of the conversation, only something about him needing to talk to a parent whose phone number no longer worked), I approached. When he finished I politely asked if he could let me into the room across the way.

It was so nice to be able to sit for a bit before class. (I sat after class started, too.) It was so lucky that he happened by at that moment in time. Sometimes I'm just lucky.
Posted by Liz A. at 8:00 AM