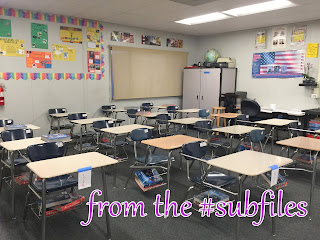 I lucked out with a government class. Seniors.

The funniest part was how many of them I knew. I looked at the roll sheets and recognized a good third of the students. Then the classes walked in, and I recognized another third.

I remember that girl. She was so upset in the eighth grade that her classmates were horrible. I promised her it would get better... Oh, I remember that boy. He gave me such a hard time in that special ed. class that one day...

And there's just something about senior year. They grow up. I'm never sure how it happens, but it does.

I recognized Vaughn the minute he walked in. I've encountered him many times over the years. When I first met him, I always braced for trouble. Over the last year, that stopped.

I also recognized Blake. He and Vaughn are friends. I've seen them goofing off outside of class many times.

It was the beginning of second period. Blake walked up to me. He asked if he could sit next to "the boy in the white long-sleeve shirt". I did not say that I knew who Vaughn was. I just nodded. And let him.

Any other year, the answer would be no. But the class walked in calmly. I just knew I was going to have a silent class. And I saw no reason to deny him.

Sure enough, the class worked silently all period. Blake and Vaughn barely communicated. (It wasn't a test. It was a "Voter Turnout Activity". They were analyzing the voter turnouts for 2016 via online resources.)

I do occasionally get to see this. They do grow out of it. And those that don't get sent to the continuation high school.
Posted by Liz A. at 8:00 AM