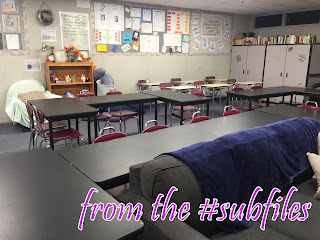 Last Friday I ended up covering the eighth grade English class of the department chair (the one who gave me lesson plans for the first couple weeks while I covered that vacant English class). They're reading Lord of the Flies.

It used to be when kiddos were reading in class, it meant that they'd read aloud, a paragraph at a time, or they'd read it to themselves. But with so many audiobook options nowadays, it's more likely that they'll follow along while a professional reads to them.

(There are pros and cons to this, and most teachers change things up depending on the day. When there are subs, using the audiobook helps with classroom control so so much.)

But, of course, the teacher didn't leave her laptop, and the hook up for the classroom speakers was on the opposite side of the room from the desktop computer. And the Chromebooks were locked up. (Sigh.)

It was suggested that I use my phone.

(I am reluctant to use my phone as it's old enough that the battery doesn't hold a charge as long as it once did. And I didn't bring a charger with me.)

So, I typed the address into my phone. I eventually got the thing to work, but it took a while. (And it was touchy besides.) During which time, well, eighth graders don't wait well.

At least I got it working well enough so that I didn't have that same issue the rest of the day. Although, there were other issues...

(But it was a good way to spend the day seated rather than on my sore ankle.)

The teacher had left helpful Post-It notes where I needed to stop and ask questions. They had written work to complete. It was a great lesson, once the technical issues were worked out.

If you're curious (or would like to have an audiobook version of Lord of the Flies), you can find that here.
Posted by Liz A. at 8:00 AM