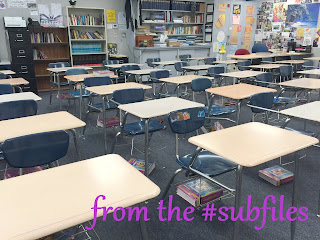 A high school day contains six periods. Most teachers work five with one "conference" or "prep" period. (The terms are interchangeable.) Teachers use that time, but subs generally just take a nice, long break.

So, when the school needs a class covered, we subs are called first. (We get paid extra for this, so we don't mind.)

We are fully into the school year, so I don't get many prep periods. I generally work them. So, on Monday I expected to get called to go and cover a fifth period (the teacher's prep). But I didn't.

I hadn't gotten any calls that day, actually. So, on the passing period between fourth and fifth, I checked my cell phone...

Yup, the secretary had texted me. (Turns out the classroom phone was broken.) She needed me to cover a fifth period. And I had three minutes to get across campus...

(I was late. Not very late, but late. But it was a computer class, so the kiddos kept themselves busy.)

Most of the time, the secretary informs me of what other class I need to cover on the prep period when I check in in the morning. But sometimes things come up during the day.

On Wednesday, I was not given an extra period, so every time the phone rang that day, I jumped, wondering if this was the call. But no. I got a call from the attendance office that a student needed to pick up his glasses. Two callers were looking for the teacher. A student was being picked up from school.

And then fifth period rolled around (coincidentally, my prep that day as well), and I hadn't gotten called. I get a free period!?!

Just to be safe, I checked my phone. No texts. So, I got comfortable...

About twenty minutes into class, the phone rang. The secretary said that a teacher had an emergency and had to leave campus right then. Sigh...

I packed up my stuff and headed over. It was the yearbook class, so they were occupied. The teacher bolted out as soon as I got there, and I got comfortable.

There's usually not this sort of drama with the covering of the extra periods, so it was strange to get two of those in one week.

(I did cover all six periods all five days last week. Two were assigned when I showed up in the morning, and one teacher didn't have a prep period.)
Posted by Liz A. at 8:00 AM