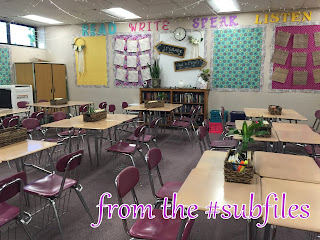 It was Thursday. I was expecting to cover a math class. When I checked in for the day, the secretary handed me the folder for an English class.

It happens from time to time. I was told I was covering one class only to show up to a different assignment. Sometimes the teacher cancels. Sometimes they need to shift subs to fill the classes. And I don't generally mind.

But it's happened four times in the last couple weeks. That's a lot.

Not that I'm complaining anywhere but here. Because the other option is for me to show up only to have my assignment disappear. (That doesn't happen as often as it did when I started out subbing.)

And sometimes it actually works out better.

On Monday I though I was covering a co-teacher who travels. (Doable, but on my gimpy ankle, not ideal.) I was switched to a very nice seventh grade science class.

On Thursday, the English class I got switched into... Well, the teacher took two of her classes with her on some field trip or other. So, instead of covering a full day, I only had three classes to sub. And I still got paid for the full day.