This week it's my turn at Unicorn Bell. I'm discussing weekly bloghops you may be unfamiliar with. I'd love it if you'd stop by and say hi. 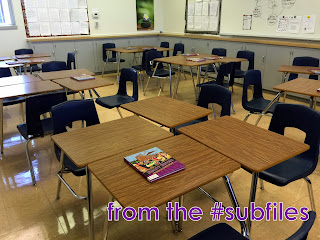 English class. At the continuation high school. They had a paragraph to write in response to an article they read. As per normal, some worked while others... well... they had the work out on their desks...

"...When you're in the back of a police car, you know they drive all like..." and he mimicked sliding from side to side.

The four boys discussed not-the-assignment in a volume more appropriate for a busy restaurant. The stuff they discussed... Cops and not giving cops information. Getting arrested. Drugs.

I informed them that they had an assignment. That they were talking too much. Too loudly. That they needed to get on task. Which they ignored. Even while I stood there, hovering.

The next day, I had these classes again. Their teacher, who was nearby at a meeting/training/whatever, was there setting up before the school day, and we discussed how things went. Harrison and his group were well known to her. Considering how little attention they paid to my instructions, she thought it'd be a good idea to have them "work" elsewhere. In the principal's office.

The class arrived. Of the four boys, two were absent. One sat away from Harrison (the loudest of the group). And Harrison found another boy (who I had had in a different class and I knew to be just as loud and obnoxious as Harrison) to sit next to.

I got class started. Which Harrison ignored. He was up and walking around. Talking loudly to the other boy. Talking over my instructions to the rest of the class.

Once the rest of the class was settled with the assignment for the day, I had time to deal with Harrison. I approached. I explained that he was to take his stuff and go and work in the principal's office for the period. (As the other boy was at least making a pretense of working, I decided to let him be.)

He wasn't having it. Oh, he howled. I "hadn't warned him". It "wasn't fair". They "weren't doing anything wrong". He refused to budge.

Well, I wasn't letting him stay in class. I could tell that this day would be a repeat of the previous one. And I didn't want to hear any of it.

So, I explained he had a choice. He could go, now. Or I could call the principal and have him escort Harrison out. And I wasn't bluffing. I would have done it.

But Harrison finally relented. And left.

Ah, the peace. It was lovely. The rest of the class got really, really quiet (even though I wasn't concerned if there was a little talking).

Harrison did return a couple times. To ask questions. About the assignment. It was clear from what I saw that he was actually making progress. Which was more than he had done the previous day.