Let's Not Go There 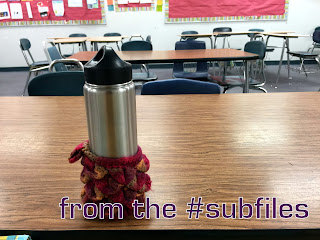 I'm not sure if this would have normally been what this teacher did for a final for this class, or if it was a special occasion due to her knowing that she'd be out this week. It was easy for a sub to administer, anyway.

The students were to watch The Wizard of Oz. As they were watching, they were to analyze the film as an example of The Hero's Journey.

But... they whined. It was in black and white. It was old. (I had told them ahead of time what to expect, but they seemed to have heard a different movie.) It was a musical.

They heckled the screen.

I'm sure you remember this scene. If not, fast forward to 2:45 where Dorothy is watching the winds swirl around...

I kept my mouth shut. I don't think he had any idea what can of worms he could have opened with that question.
Posted by Liz A. at 8:00 AM