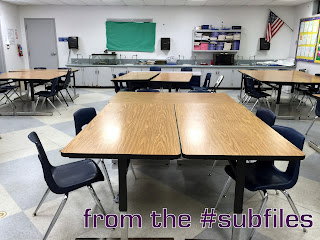 Incidents like this are why I have a blog. Because they are just too crazy to keep to myself.

5th period. 8th grade science. (No, not that class.) They had a study guide for their test the next day. Instead, they were playing Rock-Paper-Scissors. Loudly.

The prize for winning: the loser's soul.

Soon, the "winners" had souls to spare, so they started putting those up for grabs in the game.

It was amazing how fast this game went. Well, it was Rock-Paper-Scissors, after all. But I'm amazed at how far it went because I shut that thing down immediately.

I wasn't offended or anything. 8th graders can't be trusted with games of any sort. Things get loud and out of control rather quickly. As this had. (Which is why I jumped on it so quickly.)

Besides, they had a test to prepare for.

(Apparently, the penalty for losing one's soul was a prohibition against celebrating holidays. This they explained at the end of the period. After the game was long over.)
Posted by Liz A. at 8:00 AM