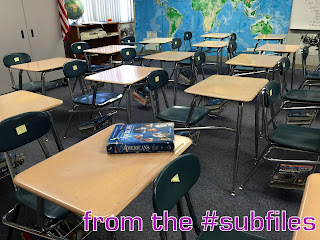 The conversation from yesterday's post did not quite end there...

Eventually, the girl let the listening to music issue go. Primarily because others in the class urged her to. I wasn't really paying attention at that point. But something one of the boys said perked my ears right up.

The boy informed the girl that I do, indeed, leave notes for the teacher. And they are detailed notes.

After some prompting, he informed me that he had been in the class I covered the previous day. Algebra 2.

You may have noticed that I have not posted a story about them. It's because I had no good stories about them. How can I possibly make a story about a class that worked silently without me having to do anything besides pass out the assignment interesting?

So, I didn't think my note to the previous day's teacher was all that detailed. What more was there to say other than the classes did what they were supposed to do?

The boy told me that Ms. C had gone over my remarks. He explained to the girl that I gave the classes a rating.

The girl now wanted to know what sort of rating her class would get. I looked around the room. They all appeared to be on task. (They were doing a timeline of World War II.) They were talking, but I hadn't asked for silence. So, I told her they'd get a 4 out of a possible 5.

I wonder what line of work she's going to go into. Because she certainly argued well.

Not that I gave the class a 5. Each number means something, a something that I include with my note. But she was entertaining.
Posted by Liz A. at 8:00 AM