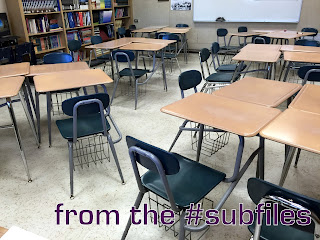 It was 7th period at the continuation high school. The bell rang. One boy stood at the door, looking out.

I urged the boy to sit down. It was time to get class started. He informed me that he didn't feel like sitting. So, I went over and closed the door.

(That was only half about him. I had the air conditioning on. I leave the door open between classes to urge the students to come in, but once class starts, I want to keep the cool air in.)

I passed out the assignment. I turned to the class to explain what they were to do, and the boy walked out.

After explaining what they were to do, I called roll. When I called the name Nathan, someone informed me that was the name of the boy who had left. Okay. I had a name. But I was marking him absent, because he wasn't in class and didn't have permission to be gone.

About a half hour later, Nathan returned. With the assignment. Not complete, because he hadn't been in class to get the instruction as to what all needed to be done.

I asked him where he went. He told me that he went to work in another class. Why? Because he didn't feel like being in the room we were in. (He might have been irritated with me.)

Have you heard the expression: it's better to ask forgiveness than permission? It seems like there's a lot of that going on at the continuation high school lately.

But it doesn't work there. Because, if he had asked to work in a different room, I probably would have let him. I did, in fact, give permission for five different students to work in different rooms that day. Each one of them asked to go.

Nathan? I informed the office about what happened, and he was marked as cutting class that period. Because, in this case, it is much better to ask permission.
Posted by Liz A. at 8:00 AM