On my last visit to the Long Beach Convention Center, I made my follow up appointment for vaccine shot number two. I figured the sequel would be much like the original. I was wrong.

The first surprise was that my school district decided that we were going to open to in-person classes. So, instead of heading from home to the vaccination site, I was going to have to leave from the school site (which is a bit farther away as I don't work for Long Beach's school district).

And, I had hoped to leave early. But, the principal had an all staff meeting that afternoon...

Okay, this is a bit of a story. Normally I wouldn't be invited to the all staff meeting, but with the long-term and how things were opening up for us, I ended up needing to attend this meeting. All the whys and wherefores are way too complicated for this post.

I left campus in a bit of a panic. I figured I was going to be stuck in line for hours.

I had scheduled my appointment for 3:56 PM. I got to the convention center at roughly 3:50.

I pulled up. Checked in. (It was a drive up site.) Pulled into the parking lot. Got my shot. And by 3:59 I was parked in the observation area where we were to wait fifteen minutes just in case. 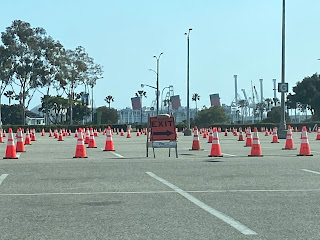 See all those cones? That was the feeder line for cars. Notice there are no cars? If you can see those smokestacks in the distance, that's the Queen Mary.

To my right was this building... 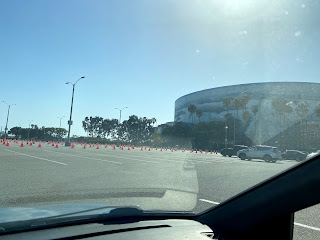 I didn't have a chance to take pics before this as it went so quickly. Way, way different than the first time.

And so, now I have had two shots. I'll be officially fully vaccinated in two weeks (April 13th).

I worked the next day and felt fine (other than a very sore arm), until I left campus that day. Then I got home. And that's when I felt it. I was so, so tired. And warm and cold at the same time. I went to bed very early, but I was fine the next day.

If you have not had a chance to be vaccinated yet, I hope you're able to get in really, really soon.