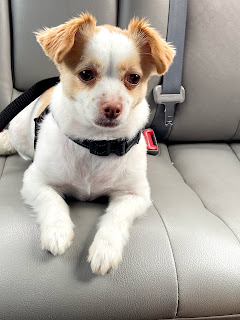 Buttercup has absolutely nothing to do with today's post, but as today's post really doesn't have an image, she'll just chill in the backseat while I go on about something completely different.

Before falling back asleep, I picked up my phone. I've been playing Words With Friends 2 since about July, and recently a mini-game has been added. It's a head-to-head competition where I'm given 45 seconds to come up with a word. Me and my competitor get five turns, and highest score wins.

These mini-games aren't "free", however. To earn a "ticket" to play, two hours must elapse. So, after having been asleep for several hours, I had a couple "tickets" to play. So, I did.

None of this would normally make the blog, except something happened...

I was on turn two when I felt a large jolt. It felt as if a car had crashed into the wall behind my bed. And my heart raced as I had a moment of panic.

I blame it on the hour and being pretty groggy.

In the next moment, my rational brain took over. "Oh, calm down. That was just an earthquake. You've been through earthquakes before."

At which point, I realized my clock was counting down, and I needed to play a word, quick.

I finished the game. I couldn't tell you if I won or lost. Then I pulled up the app on my phone to see a bit more about that earthquake.

It was a 4.1 (it said 4.0 when I checked, but since then it's been upgraded). Epicenter was near Inglewood in a town called Lennox. I know where Inglewood is. It's not terribly far away.

I'm actually rather grateful to the earthquake, as I was scrambling for a topic for today's post. I needed something that started with a G, but I thought I might have used this title for a similar post before. Turns out I haven't. But, in 2010 there was an earthquake on Easter, and I posted about it on April 4th. I mean, this was technically Monday the 5th, but I thought the coincidence way too funny not to mention.