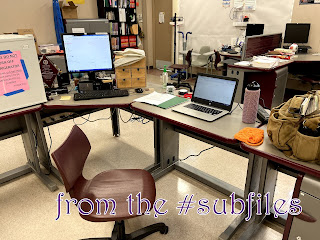 Tuesday, third period. While we were "reading" (listening to the audiobook) of chapter five of The Great Gatsby, I got a text from the secretary in charge of subs at the school. (Remember, I'm at home.) Could I cover an extra period?

Extra period assignments used to be commonplace. I'd dread answering the classroom phone because it was likely the office calling to ask if I could trek across campus to cover another class instead of getting an hour to myself. (But I got paid for that extra hour, and when they'd call they really needed coverage, so I never turned them down.) I counted them up, and I'd frequently get a "bonus day" out of them if not two per month.

The teacher wasn't feeling well. Considering that she had something in the feed on her Google Classroom from the previous day about her maybe not being in class, this must have been something that was ongoing or she was expecting.

Of course I took it. It wasn't like I had to go anyplace. It was simple to log in.

And a few of the students looked familiar. I had them in the class I've been covering all month.

(The class was "medical assistant". It's a science elective.)

So, that was another new thing with this distance learning. And just when I thought we'd pretty much done it all by now.