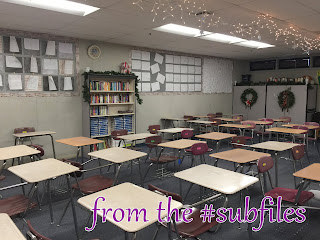 In a typical six-period school day, I cover five classes and have one period off. However, lately, more often than not, I'm asked to cover a class for that conference period.

Don't worry. I do get paid for this. In fact, once I've covered enough "extra" periods to equal hours in a day, I get paid a "bonus" day.

It was Tuesday. I was covering an English class. And, for the first time in a week and a half, I was looking forward to a prep period.

I had had days where the teacher doesn't have a prep period (they get paid for that extra hour, too) and days where I had been asked to cover a different class. I also had a day where I got off early as the teacher's prep period is the last period of the day. Getting out early is nice, but I don't get that break.

I was itching for a day to just sit for an hour. (And read blogs. Seriously, I usually spend prep periods caching up on emails and blogs.)

"My" prep period was fifth period. I had logged onto the computer and had answered a couple emails. Then the phone rang.

I cursed out loud.

I checked the caller ID. It was her. The secretary in charge of subs. I considered not answering...

It turned out she was looking for the co-teacher's sub from the previous period. Whew. I didn't know where he was, but at least she wasn't looking for me.

But then she called right back. I had a prep. Could I cover an extra period...?

I swore aloud again. After I hung up the phone.

It wasn't a hard period. Geography. One student "performed" for the class. (An email all about him to his teacher garnered a response of "he just returned from a classroom suspension for just that behavior" and the teacher would deal with him.)

It was just that I was looking forward to a period off. Sigh.

On the bright side, that was the last period I needed to complete a bonus day. So, feel free to chide me for moaning and complaining about it.