So, I pretty much missed Christmas. I realized this when I went out on an ill-advised outing on the 26th and noticed how not packed the stores were. But the day was nice and peaceful. I rested while alternating cheesy Christmas movies and the Doctor Who marathon on BBC America.

Knitting has been done, but nothing really blog worthy. I made some ugly slipper progress. I swatched a bit for some upcoming projects. And I made a little progress on this scarf... 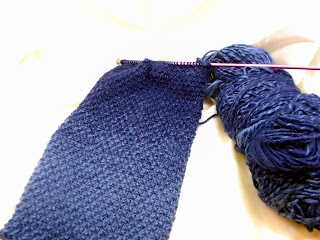 It's a birthday present for eldest nephew. He turned 13 on the 26th. (So, yeah, still behind on the knitting.) The yarn slowly changes color, so there are some long stripes. I think this picture shows the texture better... 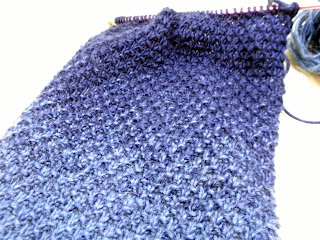 I had to rip back a few rows when I discovered a mistake. It was pretty glaring as it broke up the regular texture pattern. I realized it would be quicker to rip back than to do one of my usual laddering back fixes. I didn't lose too many rows.

The only "finished object" I have to show for the week was a custom order. She wanted my lip balm holders, but 2/3rds the length. That's easy enough... 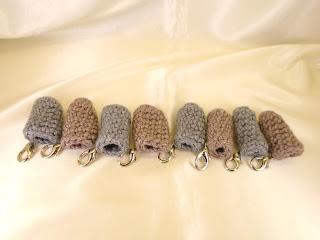 I would have had them done days ago, but the cold slowed me down. I worked the cold into the timeline I gave her, so these aren't late or anything. Woo-hoo!

As for my cold, it's mostly gone now. I'm just a little stuffy in the nose. And I still have another week off, so I'll be good as new when school starts up again.

I mentioned last week that the blog was all scheduled until the 11th. Well, except for Mondays. This week's posts are a few "extras" from before the break. (I had a couple good stories that I saved just for this week.)