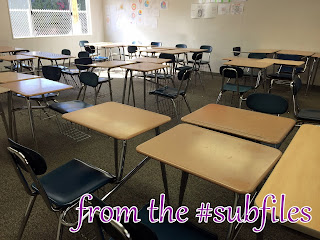 My tenth grade geometry teacher's favorite number was 17. How do I know this? I think he told us on the first day of school. He had 17s posted everywhere. Students swiped 17s from Carl's Jr, and those were strewn about. Any time 17 came up, he make special reference to it.

It was Friday, and I was covering various levels of science. Fifth period was survey of biology. They had a test.

A student called me over. The question was, "What is Ms. V's favorite number?"

The student didn't know how to answer.

Um... I've never met the teacher. I figured if she put the question on the test, she probably has made mention of her favorite number on more than one occasion. So, the student should know it.

I told him to make his best guess. (It was multiple choice.)

As I was collecting tests, I noticed that test number 12 had a heart next to the number. And that's when it hit me.

I flipped through the test. The question as to what the teacher's favorite number was? Number 12.

So, I've never met the teacher, and I figured out the answer.

After everyone had finished the test, I asked them. What did you all get for favorite number? They didn't know. Well, some of them didn't know. When I pointed out that the question was number 12, several of them gasped in recognition.

Apparently, she had mentioned her favorite number. And on more than one occasion. I heard various examples. That they remembered after the test.

Considering their behavior during the test (not good), I'm not surprised they missed that. They don't seem to be very observant. Sigh.
Posted by Liz A. at 8:00 AM