Notes on the Second First Day 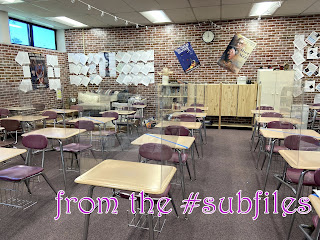 Someone, ahem, forgot to photograph the room I was in the first day back, so this photo of the long-term room will have to do. Hey, it's been a while. I'll get back in the habit soon enough.

Our first day back to in-person learning was the last day before spring break. (There were Reasons for this.) I had just finished the long-term assignment for Ms. A's class, and my next long-term didn't start until after spring break, so I got a lone one-day assignment. Math, special ed.

The day was interesting...

I was worried about being in classrooms with lots of students. It turns out, most don't want to return just yet, which means that the classrooms aren't packed. With plexiglass partitions, open doors and windows, constant airflow, and masks, things are pretty safe.