I got my first vaccine shot!

And it's a story. We did testing last week (it was the same testing we did in September), and surprisingly, things went pretty smoothly. So, I'm going to skip a subbing story today and tell you the saga of my first COVID-19 vaccine shot.

I think it was late January when Long Beach launched a vaccine list. I signed up just as soon as I got notification. It wasn't my tier yet, but we were informed that we'd get notification when it was our turn.

The first week I got an email saying, "Not yet". Same thing the second week. Then crickets for the next couple weeks after that, which was fine as I didn't need emails telling me it wasn't my turn.

Then word was out that educators were the next to go.

It was Friday night when I saw the email. "IMPORTANT: Make an appointment for your first COVID-19 vaccine dose." I was shaking as I filled out the form and made the appointment for Tuesday.

Then Sunday I got an email: "IMPORTANT: If you are not eligible to receive vaccine at this time, please cancel your appointment."

So, I had a bit of a freak out. While I do not work in Long Beach, we were told that we could still get vaccinated if we were a city resident. And educators are up. But this email came two hours after another "make an appointment" email, so I chose to believe it was a follow up to that email, and I ignored the cancel request.

Then later that day I got two more "make your appointment" emails with appointments pretty much all week. I figured there was some mix up someplace, but it didn't impact me.

Tuesday. The convention center is clear across town for me, so I set out early. Turns out, not quite enough if I wanted to be "on time". Sigh. 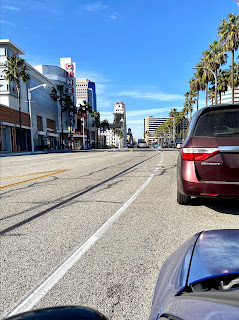 I know roughly how to get to the convention center. As I pulled onto the street, I saw a line of cars going in the opposite direction. A line that long, it had to be the place. So, I followed it back all the way around the block (in downtown Long Beach, where the touristy stuff is, so long blocks), made a U-turn, and got in line behind the last car. This was about an hour before my scheduled appointment.

I thought I was way early. By the time I snaked around to where they were checking IDs, I was ten minutes out from my appointment. 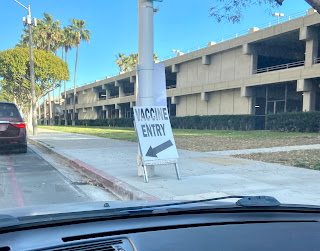 We had been told to bring proof of appointment, proof of residency, and proof of employment. I was paranoid. I brought a couple other papers besides my driver's license and employee ID. But the guy who checked me in found those to be sufficient, and in dry erase marker her wrote on my windshield that I was good to go. (He told me he was writing what vaccine I was getting and that it was my first shot.) 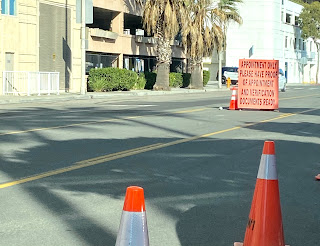 Alas, the car in front of me, the car that I'd been following for nearly an hour, was turned away and had to pull out of the line. Several cars were turned away at that point just as I was getting checked in.

Then another twenty minutes in line through the convention center parking lot. 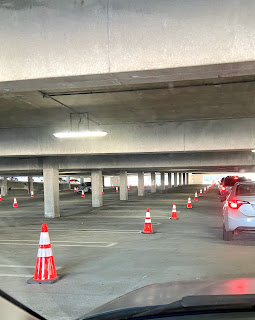 We were directed to an observation spot for fifteen minutes so they could check for adverse reactions. During this time, I made my second shot appointment on my phone.

And then I headed home.

I had no immediate reactions. The next day my arm was sore. Really sore. The day after that, though, it was hardly sore at all. But that's a small price to pay.

A local newspaper did a video story on the mass vaccination site when it opened. In case you'd like a visual of where this was...

Have you gotten vaccinated yet? I hope if not you're up soon.