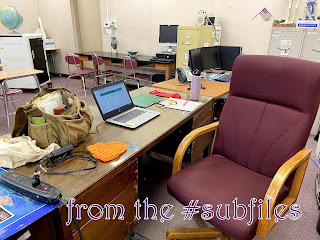 For the most part, the kiddos don't talk. They leave their cameras off as well as their microphones, so we communicate via the chat. But a few of them to turn on their mics and talk to me.

In period four, that student is Drake.

I really appreciate Drake. When I have them doing work, he asks questions. I'm sure some of his questions are questions the other students have. And he answers when I pose questions for the class.

On Friday he was early to class. He's usually early, but this time he needed to talk to me.

Drake explained that he had just moved and he was using the WiFi hotspot from his phone to log into the meet. He wasn't going to be able to do the work for class due to the move. (They were going to install the internet the next week, probably.)

Trying to be helpful, I pointed out that the school has WiFi hotspots for school work that the kiddos can pick up. That's when Drake informed me that he had moved two hours away.

Well, it's not Egypt, nor is it in an undisclosed foreign country for a funeral...

Drake will transfer schools, but at the end of the school year. This distance thing means he can finish off this school year where he's at. And I heard from other teachers that this seems to be a thing lately.

I would have liked to meet Drake in person. Sigh. But I consider that a valid excuse for late work. There are some things that one can't control.