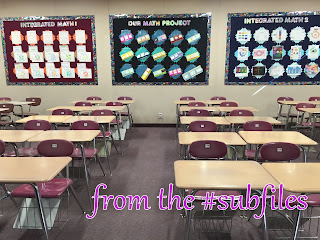 Freshman and sophomore math (what used to be called algebra and geometry).

I've subbed for Ms. J several times. She always leaves the "same" assignment. She gives them a practice worksheet (or packet) on whatever topic they're currently studying.

I've never had an issue with this before. But on this day...

I passed out the assignment to period one. The stack I had left seemed a little light. So, I counted.

I had sixteen packets. By the roll sheet, I saw there were twenty-one students in period two. That was going to be a problem.

Luckily, Ms. J had left me someone to contact for issues. Ms. R had first period prep, so once I got a hold of her, she made me more copies.

Period two arrived. I passed out the assignment.

And, I swear, I had the same number of assignments left over as Ms. R had made for me.

Now, that can't be right. I know this. I had one absence, so I would have been short four packets. And I'm sure Ms. R made more than five copies. But I had, like, eight left over.

The math is somehow wrong here, and I can't figure out how.
Posted by Liz A. at 8:00 AM