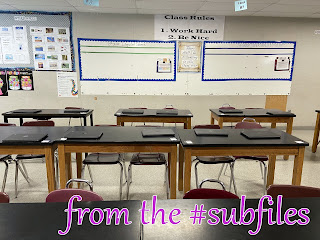 There's a moment after your balance has been lost, when you look around for something to grab onto and find nothing, when acceptance sets in. You're falling, and you're going to hit the ground, and there's nothing you can do about it.

I'm rather glad a stronger curse didn't come out of me at that moment, because I was in a classroom filled with seventh graders.

It was fourth period on the last day before winter break. (December 19th, to be exact. I started autumn with a fall and I ended it with another. There's a symmetry there...) They had finished their finals, and on this day they were just hanging out. I was monitoring them to make sure they didn't destroy the classroom.

Actually, fourth period was a pretty good class. If I had ranked the week, they would have earned the number one spot.

I was seated at the front of the room. The stool was in a slightly wrong spot, so I stood up, moved it slightly to the right, and sat back down again. Only, I was still positioned to sit on it where it had been, so instead of sitting on the stool directly, I hit the edge. The stool tipped, and over I went.

I landed flat on my back, staring at the ceiling.

I just wanted to lie there for a moment, contemplating my luck or my life or something. But I was in a room with seventh graders. In a moment, they all surrounded me.

"Do I need to call the nurse?"

"Did you hit your head?"

On the bright side, they weren't laughing. (Eighth graders would have been laughing.) But lying on the floor was out of the question. They were going to get me up with their help or without.

I told them I was fine, the nurse was unnecessary, and that I hadn't hit my head. (A sore neck later that day told me I had held my head up so that it didn't hit the hard floor.)

I crawled to my knees and pushed myself up. I was so grateful that I hadn't fallen forward this time. Instead of a scraped up knee and twisted ankle, my butt and lower back had taken the brunt of this fall.

I refused to sit on that stool for the rest of the day. (It was a short day, luckily.) And I could still move. Sitting down and getting up gave me a twinge, but moving about was okay.

I did write this in the note to the teacher. Because, seventh graders. There's no way that spill doesn't come up in conversation. And because seventh graders, I'm going to be hearing about this for the next five and a half years. Sigh.

(It's three weeks later, and I'm fine. I had a black and blue line from mid back and going left that's largely gone now. My left "cheek" hurt the longest, but that pain is mostly gone now.)
Posted by Liz A. at 8:00 AM