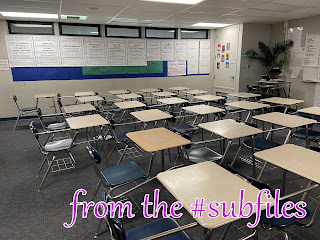 I may have mentioned before that this school year I've been hit with a lot of these. That is, I've arrived at the site expecting one kind of class only to end up covering a different one.

I'm not complaining. It's way better than showing up to discover that I have no assignment at all. And sometimes the change has been for the better. Although, on this day, it was more of a lateral move.

For a change, I learned why the switch.

When I got to class, Ms. A was hurriedly putting together lesson plans. Then another teacher walked in, and they got to talking. I was able to glean the whole situation.

There was a field trip. The eighth graders were going to the closest community college (the one that most of the students at the local high school end up at, the one that is offering two years free to graduates). Ms. D was supposed to chaperone, but she had woken up sick. They asked Ms. A if she wanted to take the spot, and she jumped at the chance. (The other teacher was telling Ms. A that she thought she'd say no, and Ms. A explained that she loved going on field trips.)

However, Ms. D was sick, so she was out that day anyway. So, um, why did they call in a different sub to cover her class? I mean, I was already scheduled to be there for her.

Sometimes school logic eludes me.
Posted by Liz A. at 8:00 AM