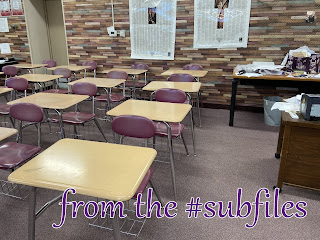 It was just an ordinary Wednesday at the high school. They worked; I watched. I looked about for something, anything interesting to post about.

The day ended. I checked out. I headed for my car.

The hood of my car was open. It wasn't propped open, but it wasn't fully shut. I closed it, and I wondered. Had I accidentally popped the hood as I got out of my car that morning? I've never done that before. Was it possible?

When I went to start my car, I realized I hadn't accidentally opened my hood. Because, my car wouldn't start. And unlike when my battery has died (which it has done a few times over the years), I had no power at all. That's when I suspected...

I opened up my hood to be greeted by... 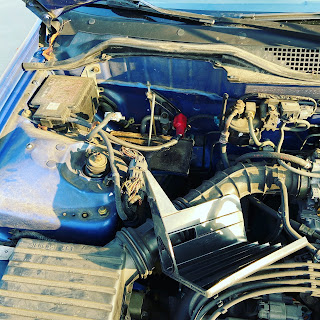 ...a big gaping hole where the battery should be.

I didn't have any time to process this turn of events on my own, as one of the security guys noticed my distress, and he was standing with me when I opened the hood. He immediately called for the rest of the security team.

While they were talking about "the video" and how long my car had been in that spot (all day), I was contemplating next steps. I needed a battery. AAA has roadside battery service. So, I needed to call AAA.

The guys were concerned that something else had been taken out of my car. But I could tell that nothing was missing. I don't really leave anything of value in my car anyway, and besides, it didn't feel like they'd been inside the car. How did they gain access to the engine (as the hood release is inside the car)?

Waiting for AAA to arrive, another of the security guys was talking about insurance and police reports, and only then did it occur to me that I should probably call the police. I mean, one does call the police when one has been robbed, correct? And what is the proper term for this? Burgled? Thieved?

Security got word that they found the incident on the video surveillance. (The school has cameras all over.) The thieves were in a silver Nissan with no plates. Apparently, the whole theft took them five minutes. They reached beneath the car to release the hood. I was invited back to see, but I didn't really need to. I doubt I would recognize them, and I was waiting for those I had called, anyway.

AAA arrived. He was just getting started when the police arrived. The AAA driver made a comment that he does arrive before the cops, but I had called AAA first, so that really doesn't count.

The cop asked how much it was going to cost me to replace, and the AAA driver quoted him the price.

I gave my statement. The cop was surprised to hear that there was video of the incident. He asked if he could see it, and the security guy said, "Of course". It sounded like the cop had been to the school before, for he knew which office he'd need to go to for this.

AAA finished just slightly before the police were done with me. I was given a file number for my report, and then I was on my way.

I have been subbing a long time. I've been working at this school for years. This is the first time my car has been broken into. Still, I was nervous to return as I was already scheduled to cover a class there on Friday.

Friday came and went. My car was in the same state as I had parked it in. But I'm still going to be a little nervous for the foreseeable future.
Posted by Liz A. at 8:00 AM