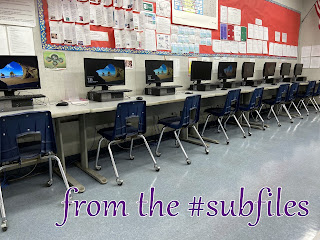 Keeping the kiddos in class is more of a challenge at the continuation high school. They will take any excuse to roam the campus.

Tuesday I covered the computer class. And every period at least one boy took forever to use the restroom. It's a small campus, so they didn't have far to go. Yet, 20 minutes, 30 minutes they were gone for.

Students who abuse the liberal restroom policy get placed on a "floaters" list. They lose the privilege of going during class time. So, I note those who disappear for half a period, because they probably don't do it with just me.

(I even had a student disappear for ten minutes when he stepped outside to blow his nose. I got up to find out where he went, and he was sitting at a bench outside, chatting up a couple girls. When I got him back inside, he needed to go next door to return the restroom pass to that teacher--he had borrowed it the previous period. That took another five minutes.)

Students frequently need to speak with the counselor or the principal. If they're kept, they have a pass. I don't mark them tardy if they have one of these passes as they have an excused reason.

I could see the counseling office door from my classroom. It's about as far away as the restrooms. It does not take 45 minutes to get from one to the other. Walking at a good pace, it shouldn't even take a full minute.

Just to check, I called the counselor. It took her a minute to realize who I was talking about (that's how long it had been since he'd been there). She verified he left her office at 10:15.

I went to the attendance clerk. I gave her the pass and told her this story. She shook her head, and then pulled up his attendance record on her computer. She encoded it as a "cut" for the period. She even gets a little box to write an explanation, so she wrote that in.