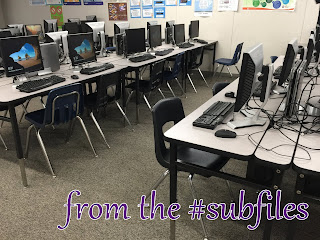 The first week back after winter break is traditionally pretty slow for subs. But illness has taken hold, and the computer teacher was hit hard. The students were all, "Another sub..."

It was a bit of a scramble to get the lesson plans. (They had been emailed the previous day, but the prior day's sub hadn't left them.) And then...

Any other week, all I'd have to do with the class was tell them to go into Google Classroom and find their assignment for the week. But it was a new semester, and this class was a semester course. These kiddos were brand new to the class. Which meant that they needed to sign up for the Google Classroom class.

This is actually pretty simple. All they need is a seven digit alpha-numeric code. Which I could not find on the lesson plan anywhere.

There were links to the Google Classroom page. The teacher had said the codes were included. And the sub's note from the previous day said they had worked well. So, what was I missing?

Turns out the codes were there, just in small print. It only took me a half hour to figure it out...