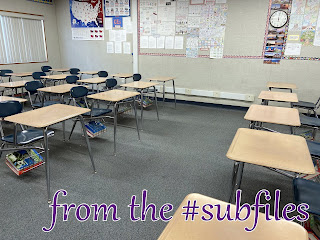 The teacher was out all week. (Bereavement. Her mother passed away.) She gave them a project.

It was a very clever project. They were to write a "bill" for the House or Senate. They could pick any topic, and they were given a template for how the thing should look. Then they were to create a poster to go along with this fictional bill.

They had four days to work on it.

I did not cover the first day, but I was there for the last three. So, on day two, they acted as if they had it. Quiet classrooms. They appeared to work on the computers.

Oh, the scramble. So many of them needed to get their "bills" printed, so there were a bunch of them who needed to go to the library. (They can print their work out there. There was no printer in the classroom.) And so many of them had barely started their posters.

It was entertaining to watch, really.

I got a good stack of finished projects. They had come up with some interesting "bills".

And I can't complain. No one was surprised by the deadline. They were told it up front.

It's the same everywhere. We all kind of scramble to get things finished on time.
Posted by Liz A. at 8:00 AM