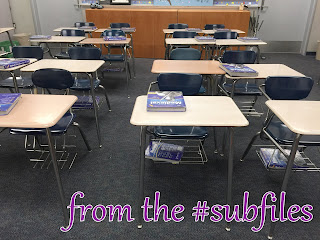 I had the same class all last week. Seventh grade world history. Advanced. Their teacher was on the annual field trip to Washington, D.C.

I believe I've mentioned that subs have been in short supply this year. More often than not, I'm covering a different class on the teacher's prep period.

Mr. F's prep period was fifth. Around third or fourth period, I'd get a call from the secretary telling me what class I was going to cover for that fifth period. Monday it was an English class I'd covered before. Easy group. Tuesday it was a very small special ed. class.

On Wednesday, she called to tell me I'd be covering a math class. And I groaned.

The teacher's morning was co-taught. The teacher's sixth period was pretty good, actually. But her period five...

I wrote about them. Well, kind of. They're the ones that somehow managed to make a room smell of marijuana.

As it turned out, the teacher was there to start off the class. (She had an IEP meeting that period.) She told me that fifth was her bad class. Yup, I remembered.

And, actually, I had a student that I had had earlier in the day. (This happens sometimes. When they point it out, I cackle and tell them they can't escape me 😛) Let's just say I wasn't surprised at his inclusion in this class.

(Ms. T told me this would be true of two students. At least a dozen made the claim.)

Ah well. On the prep period lottery, you win some and you lose some. Four good preps out of five isn't too shabby.
Posted by Liz A. at 8:00 AM