No, not literally. Although, the concussion screams intent.

It all started about three weeks ago, on April 30th. I sat on my bed to put on my shoes, something I do every morning.

The bed fell under me. In that moment, I wanted to figure out what had happened, but I didn't have time, not if I wanted to get to work on time. So, I finished putting on my shoes, and I was out the door. I didn't think too much about it, other than some generalized worry, until I got home. That's when I went about ascertaining what broke.

The bed is what they call a Hollywood frame. It's just a simple rail. I've had this bed for about five years without a lick of trouble.

It turned out that the wheel had snapped off. I was able to glue it back together and place it back on that leg. 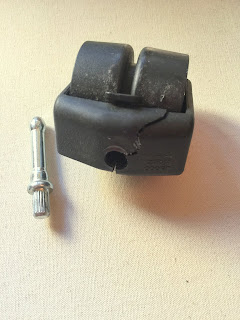 But that was a temporary fix.

I searched online for a replacement wheel. No local retailers carried it, but it was available online. (From wheel break to ordering replacement wheel took two days. I had to go to work and such.)

Alas, the temp fix was very temporary. The wheel continued to fall off at least once a day. Anything would jar it loose. I was very careful with my movements, but still it would pop off with a "thunk" when I least expected it. Or when I did expect it. It was a pretty constant thing.

Tracking showed the replacement showing up the following Tuesday, May 7th. But on Saturday, when I had time, I needed to deal with another bed problem. The rail was creeping out. An easy fix...

I stripped the bed. Then, by myself, I flipped up the mattress and box spring to lean against the wall. Then the rails. I tightened them. I put the bed back to rights. Since I had stripped the bed, I figured that was a good time to wash the sheets and such. Once they were clean, I remade the bed, and all was good, except for that wheel. I was good for a couple days, until the wheel arrived.

Only, guess what came in the mail just after I had finished putting my bed to rights?

So, this next bit is just sheer laziness. I didn't fix the wheel that day. I figured I could wait another week. What's another week, right?

Then, Tuesday night, as I was nearly asleep (and not moving at all), the wheel fell off again, and I was DONE.

After work Wednesday, May 8th, I stripped the bed, flipped up the mattress and box spring, flipped up the rail, and went about removing the wheel. You'd think this would be easy, but the wheel was attached via a long connector that didn't remove easily. Pliers worked. 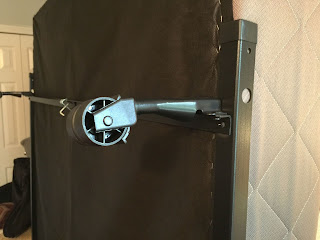 Before returning the bed to rights, I went to tighten the rails again. Only, one of the brackets would not. It popped off the bed.

Upon further examination, I found that the bracket had bent, just a little. But that little was enough so that it would no longer fit on the bed. And the rail needed that to support weight.

Over the course of an hour, I tried everything I could think of, including hammering the bracket to bend it back. It was enough. I was able to reassemble the bed.

It was so nice to sleep in the bed without having random thunks in the middle of the night.

However, as I walked by the bed the next morning...

The bottom half of the bed had collapsed. The bracket failed.

Again, I went online to order a replacement part. (I did go out to see if I could find it locally. I could not.) But what size did I need? What did I need to measure? That took a while to figure out.

While I was waiting, though, the frame would not hold. There was nothing else to do but remove the frame entirely and put the box spring on the floor, like a teenager. Sigh. (Plus, I store stuff under there. All of it had to be moved out and stored somewhere for the wait.)

The replacement bracket arrived on the following Monday, May 13th. I worked up the energy to put things back together on Tuesday. I stripped the bed, flipped up the mattress and box spring, and brought the rails out.

I propped the two parts of the frame up against the box spring as it leaned against the wall. I started by attaching a bracket to the bottom half...

I'm sure you can see what's coming. If I had been thinking...

Yeah, so one side fell over as I was doing this, landing on my head. Hard. No, I didn't pass out, but it hurt.

And... The bracket didn't fit. It turns out that I had ordered the wrong size.

(I spent an hour trying to figure out which size I needed. I measured. I even tried it on the rails before flipping up the bed, and it seemed to work. But when it came time to actually put things together, big fat fail.)

So, everything had to go back to how it had been. Back to the internet to order the correct size. Hopefully.

This time I ordered the part right away, although I spent a lot of time looking at the smaller size. Was this correct? Was I going to screw up again?

Tracking showed that the package would arrive on Saturday. I was out, so I wasn't thinking about the package delivery. I pulled my phone out of my purse to check the time or weather or something to find a text from the delivery driver.

He couldn't find my place. And I had five minutes to respond. The text had been sent a half hour prior.

(I know, you all have your phones set so you can hear them when you're out, right? I don't. My ringer is set for a good volume to wake me for early morning subbing calls. Soft enough so that it doesn't jar me awake. As I get very few actual calls or texts, I don't think about raising the volume the rest of the time.)

Then I got an email saying the delivery had failed.

Grrr. Was I going to have to wait another week for another day off to finally fix my bed? Was I even going to get the delivery?

But then, I get home to find the package. I guess the delivery driver found my place after all. Whew.

These brackets were smaller than the ones I had already on my bed, but they actually fit. Hooray! 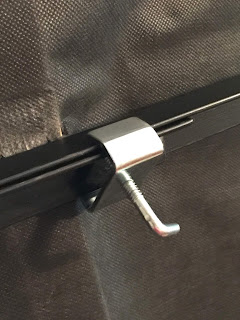 And on Sunday, my bed went back together. Finally. 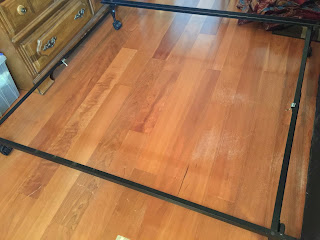 So, fingers crossed. Because if this bed breaks again...