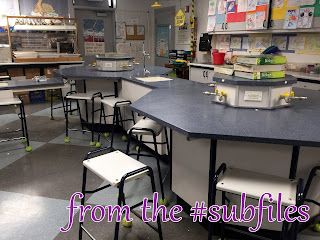 The lesson plan had me going out to the tennis courts sixth period to "supervise".

I dislike covering sports, but from time to time I must.

First, I have to find the class. The teacher usually gives me a vague idea of where to go, but these areas can be fairly large, so locating where the class usually meets can take a bit. (It's nicer when we can just meet in the teacher's classroom, but that's not always feasible.)

Then, somehow, I must take roll. After that, ideally, they practice. The cross country team would go out for their run. Other teams may do something, but the last time I covered tennis (a while ago--not this school year), they pretty much goofed off for the hour.

So, I was not looking forward to sixth period. Not at all.

I got through the day. (Biology is a freshman course, so I had those usual issues.) Then it was lunch. I had a half hour to linger in the classroom and anticipate the tennis team.

I packed up. I logged into the attendance software on my phone. The bell rang for the end of lunch. Just as I was ready to get up and head out to the courts, the door to the room opened. It was the teacher.

It took me a couple minutes to process "you can go". Sometimes when teachers are on campus, they'll stop in to check on things, and then they'll go on their way. So, my brain stuttered over the teacher saying he'd come back early enough to teach his sixth period class.

Once I caught up, I was quite content. Not only did I not have to cover the tennis team, I got to go home early. Score!

(Early in my subbing career, I felt like I'd have to stick around as I was supposed to be there. But lately, I'm good with leaving early and letting the office know the teacher has returned. They know I'd never leave a class unattended.)
Posted by Liz A. at 8:00 AM