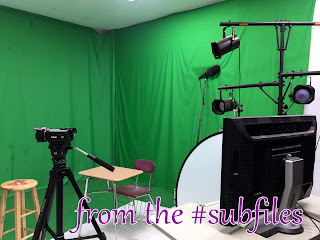 According to my counter, this is my 2600th post. I was going to celebrate my 2500th, but didn't notice until after the fact. (That post went live on December 25th.)

Video and TV production class. They produce a school-wide TV program that gets shown every couple months. They were working on segments for the next episode.

There were three groups of four in the class. Before he left, their teacher warned them to get their segments done. Deadline was looming.

Group one claimed the side room to film in. I found group two in an editing room doing nothing. Um...

This was very reasonable. (There were different props in the room as opposed to the spot pictured above.) I suggested they talk to group one and figure out a way to share it. This was something group two could not do. "No one talks to them," they explained.

Seriously? It's May. They've been in this class all year. And they don't talk to a group in the same class? Sigh. Teenagers...

So, I went to talk to group one.

Well, that made sharing the room easy. I booted group one. Group two got to work. And group one...

Group one decided to go back to their original plan, which meant they were filming outside.

(The teacher, upon his return from his meeting, explained that group one had a plan that he'd approved, but they kept trying to change it. Or something. Anyway, their dilly-dallying was well-known to him.)
Posted by Liz A. at 8:00 AM