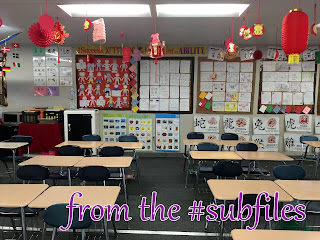 It was Thursday. I was covering the Mandarin class. No, not that one. Different school. Apparently Mandarin is a thing now. At least for this school district.

That morning, I woke with a sore throat that went into full blown head cold for the holiday weekend. (If you noticed that I wasn't around the blogs, that was why.)

It turned out to be not a bad day. Which is a good thing when one is starting to feel miserable. However, I was warned about sixth period. They were the "interesting" group.

When the teacher told me this (Ms. L was there that morning as she was chaperoning a field trip to a local temple), I took a look at the seating chart (with pictures!), and I did recognize the students she warned me about.

Jake was one. I did get to chide him on pretending to be Steven. When the other students overheard this, I informed them that Jake preferred to be called Steven. And I told Ms. L about this later. I so hope they tease him about it for the rest of the school year--from that day, two weeks.

Ms. L explained that she had placed one girl, Monica, as a sort of buffer between the boys. If the boys got too bad, I was to let Monica move away.

Class started, and Ryder shooed Monica out of her seat and took it. Monica was a willing participant in this, so much so that when I informed them that I had an accurate seating chart, they did not move.

Okay then. Just another addition to the note.

Towards the end of the period, a few of the students who had gone on the field trip returned. This is pretty standard.

Suddenly, Monica and Ryder knew exactly where their seats were, and they were in them.

Ms. L did not return. After the class was dismissed for the day, I did manage to locate Ms. L and let her know how the day went. She found the seat swap interesting.

Alas, poor Monica was in for it. (Although, one of the boys I was warned about did not behave badly, so he got a pleasant surprise the next day.)
Posted by Liz A. at 8:00 AM