Knitting Hedgehogs, a Stink Bomb, and a Wild Goose Chase

I've been doing the A to Z Challenge since 2013. It's a fun little blogging game for April. How can I make my usual blog post fit the letter of the day?

As for completing the challenge, I normally write five blog posts a week. Blogging all month isn't the challenge. Doing the blog hop and keeping up with comments--that's the challenge.

For the hop portion of the challenge, I was #510 on the master list. As in previous years, I started visiting at the blog just after mine (#511), and continued until I was able to comment on five other blogs. (I "hopped" about five days a week.)

By the end of the challenge, I had made it to #26 on the master list. Yep, I managed to get to the end of the list and start over. This has been a dream of mine since 2013...

A (very small) sampling of the blogs I visited: 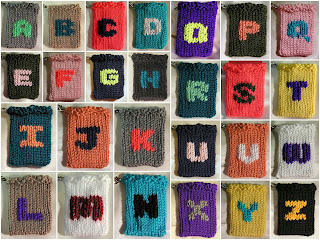 I like doing the blog hop to find new-to-me bloggers. That's the whole point, isn't it? So, that makes this year more of a success than last year. But I am glad that April only happens once a year.
Posted by Liz A. at 8:00 AM

Email ThisBlogThis!Share to TwitterShare to FacebookShare to Pinterest
Labels: a to z, HK