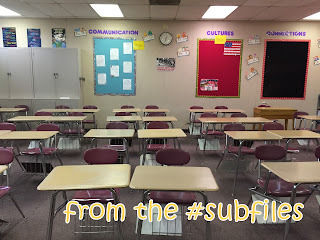 I don't often cover Spanish classes as I didn't take Spanish in school, so I was rather grateful that the class had a test. Well, actually, they had two tests.

The first test was to be taken on the computer. The second test was written.

For the first test, I distributed the Chromebooks. They logged into the textbook's website and did that exam. Then I had them return the Chromebooks before I'd give them the paper for the second test.

If you take a look at the classroom setup above, you'll notice that some of those desks are right next to one another. Because of this, the teacher had two different written tests, an A test and a B test. It was my job to make sure that students sitting next to each other got different tests.

What could possibly go wrong?

Well, students finished their computerized test at different rates. As they returned the Chromebooks, I had to determine which written test to give them. I decided that desks on the left of the pair would get the A test and desks on the right would get the B test. I just had to keep track of where they came from.

Yeah, well... About half the class I watched get up. The other half I had to ask where they were seated. And with how the room was situated, you know I did screw up. At least I only messed up once. Which put three boys in a row with A tests...

I was bound and determined to figure out a way to not screw up again with the next class.

And it worked. For every student who I hadn't seen where their seat was, all I had to do was ask what number computer they had.

Sometimes the solution is simple. Sort of.
Posted by Liz A. at 8:00 AM