As of "press time" I had not completed the project with the wire covered in knitting (crochet?). I got sidetracked... 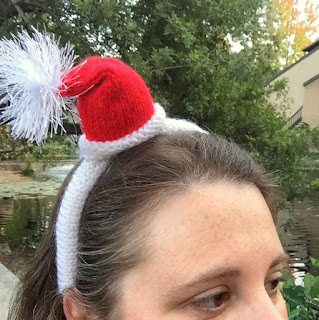 It's a mini Santa hat on a headband!

I saw a kiddo wearing one a year (two years?) ago, and it's been sitting on my "knitting to-do list" since then. I noticed it the other day, and I realized I had all the pieces I needed. I repurposed the white headband I'd already made (the kitty ears came off easily), and I found a mini Santa hat pattern on Pinterest. 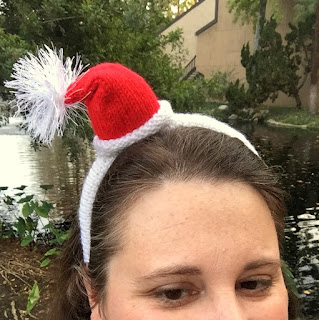 In case any knitters want to take a stab at this, I'm including all the links you'll need:

The headband pattern I posted this past February.

The mini Santa hat pattern is here. I used Caron's Simply Soft yarn (I had this on hand already) on size 6 double pointed needles. (I ended up with a gauge of 6 sts per inch.) My hat ended up bigger than the pattern intended, but it was about the size I wanted.

I can't find the link for the "poof" on the tip of the top. I used Lion Brand Fun Fur and made a knitted bead. (If I can track down the pattern I used, I'll edit this post and include the link.) However, the hat pattern has a "pom pom" part, or you can improvise something different.

Once the headband and hat were complete, I put a little fiberfill into the hat (just enough to fill the bottom half lightly), and I grafted the hat to the headband using white yarn. (It was the same yarn I used for both the brim of the hat and the cover of the headband.)

Then I folded the hat so it had that jaunty angle, and I tacked the top to the middle.

This thing is too much fun. If you make one, would you please tag me if you post it to Instagram, Twitter, or Ravelry? I'm @ZiziRho. I would love to see other people's interpretations of these.
Posted by Liz A. at 8:00 AM