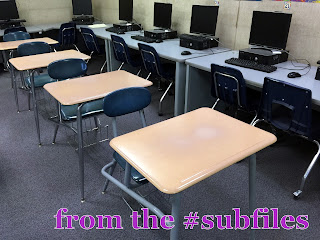 Monday I was back at the continuation high school. Math class.

They do all their work on computers, so my main job is to monitor them and make sure they're on task. (I also occasionally am called on to assist with problems that they're having difficulty with.) There is a computer program to help with this, and on this day I found that more of them were off task than on.

Not surprising. Annoying. So, I kept a list of those who were off task.


In one class, a student decided to apply for a job online. While I applaud his determination, job applications are best filled out when one is not in math class (when one should be doing math). I told him something of the sort.

I should mention that he was applying to work in a retail environment.

I pointed out that math has some bearing on selling things. He argued that he didn't really need algebra.

Perhaps. Perhaps not. We did the usual argument. He refused to get back to work. I walked away (because belaboring the argument doesn't help). And, of course, I noted the exchange in my note to the teacher.

The next day I was back at the continuation high school but in a different class. Naturally, the job seeker was my classes this day, too.

He had a bone to pick with me. Apparently, his math teacher wasn't pleased that he was applying for work instead of doing his math.

"I thought we were chill. Why'd you have to snitch on me?"

I'm not sure what part of our conversation led him to believe that I was okay with him not being on task. Or why he'd think I wouldn't report what did and did not get done in class.

Deep sigh. Just another day dealing with teenagers.
Posted by Liz A. at 8:00 AM