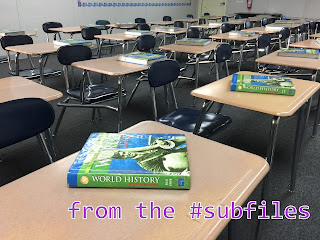 "Look at this. We have to write all this down. It's too much work. I'm going to drop out."

10th grade world history. The assignment the boy was referring to was something about PowerPoint notes. It was two full pages long (or front and back of one page). In the grand scheme of things, it wasn't huge.

However, it was more than the boy wanted to do.

His friend, sitting next to him, concurred.

"You know [I forget who he named] dropped out, and look at him now."

I responded much as you'd expect. The gist was "stay in school". When I pointed out that most dropouts don't end up famous (or even comfortable), the boys responded with, "You don't think I can make it?"

Ah well. It's better than planning on becoming a drug dealer.
Posted by Liz A. at 8:00 AM