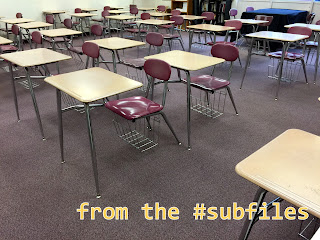 For today's #ThrowbackThursday, I picked a post at somewhat random. (To be truly random would have taken more trouble than I was in the mood for.) It's from January 6, 2010.

Oscar waited until after the bell rang to ask. Usually new students find me when they first enter the room. And he was sitting in the one empty seat in the room. This was my warning.

I assigned Oscar that empty seat, and then I began class. They were to outline the next section in the textbook. Then they were to answer questions. It was a pretty straightforward assignment--standard stuff for a sub day.

As this was a freshman class (health), I walked the room to make sure that they got started. I had to stand over a couple of them as they fumbled with their folders (before I got there they made no attempt to find their materials). As I passed by, Oscar waved me over.

The student seated next to Oscar asked why he was playing. Oscar repeated that he was a new student. I took Oscar's schedule which was out on his desk (the schedule I consulted to verify that he belonged in the class), flipped it over, and pointed to the "returning student" handwritten at the top.

"But that doesn't mean I was in this class before."

Not more than two minutes later, a student a couple seats behind noticed Oscar. "Oscar, you're back," he said.

The students around them laughed. They wondered why it took the boy so long to notice that Oscar was there.

Just to make sure, I flipped through the roll book. Sure enough, Oscar had been enrolled in the class back in October. The seat I put him in had been his seat previously. I knew this because Oscar's name had been erased.

What was the purpose of him telling me that he was new? And why did he keep insisting he was new, all evidence to the contrary?

I explained the assignment to him anyway. He ignored me. He didn't do any work.

Sigh. Freshmen. Sometimes they make no sense whatsoever.
Posted by Liz A. at 8:00 AM